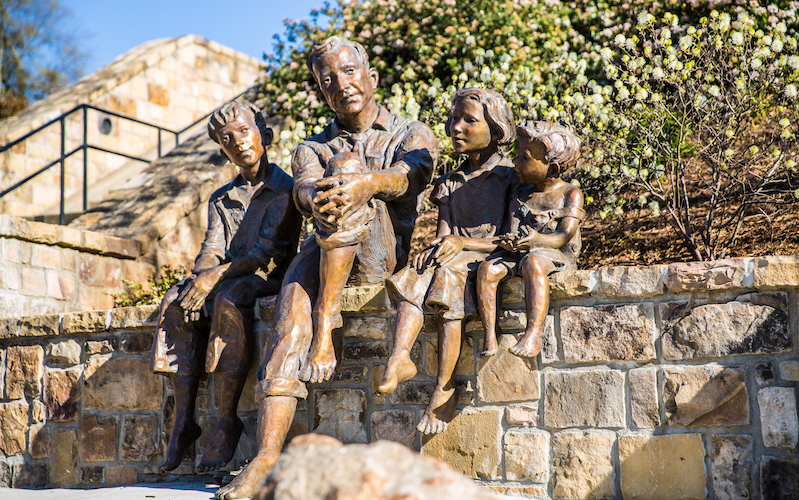 The Thompson Orphanage and Training Institute was founded on this spot in 1886. Edwin Augustus Osborne, a descendent of original settlers of Mecklenburg County, became the first superintendent of the orphanage. After serving as a soldier in the Civil War, Osborne worked as a lawyer and County Clerk before becoming an Episcopal Missionary and then the superintendent of Thompson, a position he held until 1898. The orphanage was named for Lewis Thompson whose wife Margaret was a financial contributor and donated most of the land for its campus.

When it was founded, Thompson was on the outskirts of the City of Charlotte and took in orphans from across North Carolina—children whose parents had died and also those whose mothers and fathers could not care for them due to poverty or illness. The 40- acre campus included a functioning farm. Tending the vegetable garden and milking the cows were among the children’s’ daily chores. Today, many older Charlotteans have fond childhood recollections of their families purchasing milk from the orphanage.

By 1956 Thompson was surrounded by the City and some of the land had been taken to build Independence Boulevard and Pearl Street Park. Most of the orphanage property was leased to the Rouse Company for construction of the first enclosed shopping mall in the south. In 1970 Thompson moved to a new campus on St Peter’s Lane in Matthews and changed its name “Thompson Children’s Home.”

Thompson has evolved from its early beginnings into an organization operating across the Carolinas. Today, it is a leading provider of clinical and prevention services for children and families. At each of its current locations, it provides comprehensive education, treatment and care for children in need. At its most intensive level, Thompson heals children who have been severely abused and provides them with the support and services they need until they are secure in a stable and loving home.