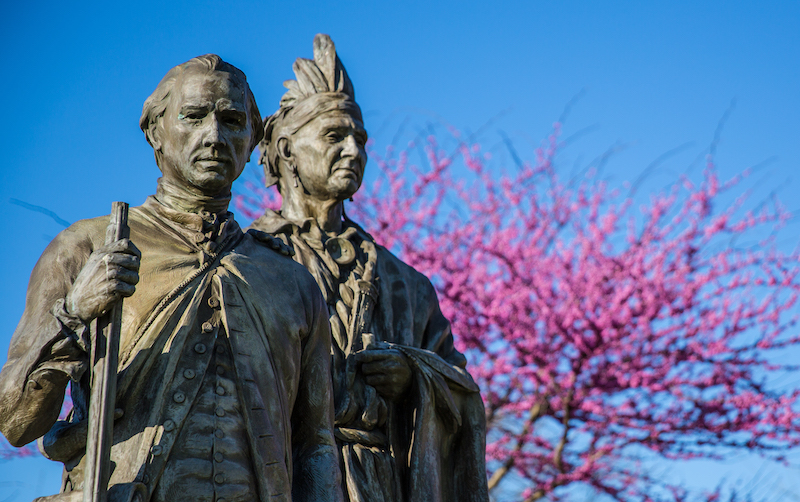 Thomas “Kanawha” Spratt was among the earliest settlers in this part of the Carolinas. His father, also named Thomas Spratt, purchased land on Twelve Mile Creek, near present-day Fort Mill, SC, in 1750 and later added two plantations. At the time all of these plantations were in an area of Anson County which later became Mecklenburg County.

Spratt started farming his father’s land on 12 Mile Creek as early as 1752 and inherited the plantation on his father’s death in 1757. The land was originally purchased from North Carolina, but was part of the 225 square miles of land North Carolina gave to the Catawba Indians in 1763. The Catawbas chose to be part of South Carolina and for many years Spratt and his descendants leased the land from the Catawbas.

Spratt was a friend of the Catawbas, negotiating the leasing of Indian land to other Europeans and fighting alongside the Catawba braves against their blood enemies, the Shawnees. He received his nickname “Kanawha” from the Kanawha River which empties into the Ohio at Point Pleasant, in present-day West Virginia. It was here that he took part in a battle, just before the American Revolution, where the Shawnees were defeated by soldiers and their Indian allies from Virginia and the Carolinas. Years later, Spratt was an officer in the American Army and fought against Lord Cornwallis when he invaded North Carolina. Throughout his life he was a friend and agent for the Catawba Indians, remaining fast friends with the chiefs and their people.

King Haigler was the greatest of the chiefs of the Catawbas and the only one ever called “King.” He presided over his tribe from 1749 until his death in 1763 when he was ambushed and killed by a party of Shawnees. This was during a time of great trouble for the Catawbas as the Shawnees and other Northern tribes as well as the Cherokee were raiding and killing his people. It was also a time when European settlers were moving into the back country of the Carolinas and life was changing for the original inhabitants. King Haigler allied himself with the new settlers and proved to be a great friend of the Europeans. He wisely negotiated a number of treaties with both North and South Carolina, guaranteeing safety and support for his people and protection for the settlers. He negotiated a settlement with the Governors of North and South Carolina resulting in their granting 225 square miles to the Catawbas and placing this land in the colony of South Carolina. His braves fought alongside the English against the French and Indians and later took the American side in our Revolution.