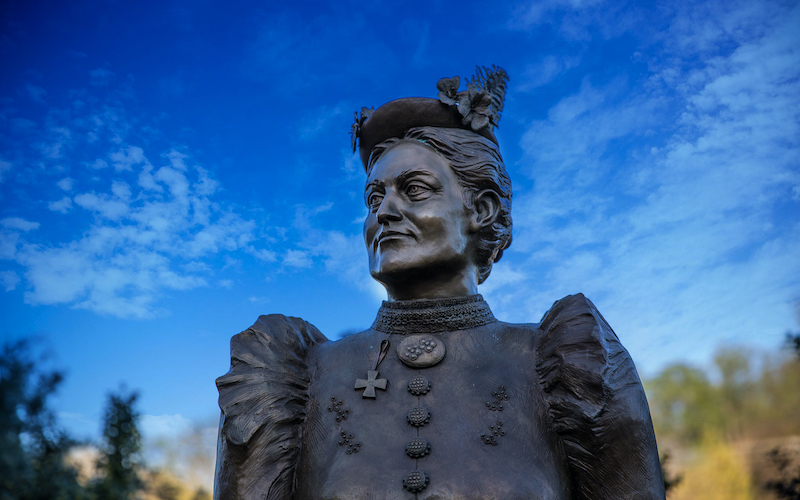 Jane Renwick Smedberg Wilkes was born on November 22, 1827 in New York City and moved to Charlotte shortly after her marriage to John Wilkes in 1854. During the Civil War, many Confederate wounded were sent to Charlotte, and Jane Wilkes volunteered in the Confederate camp hospitals. This experience convinced her of the need for a permanent hospital, and in 1875 she became very active in leading the effort to build Charlotte’s first two civilian hospitals.

As president—and later secretary—of the Church Aid Society of St. Peter’s Protestant Episcopal Church, Wilkes worked tirelessly to raise funds and establish the Charlotte hospitals. The Charlotte Home and Hospital of St. Peter’s Episcopal Church began serving the white community in 1876 and was the first civilian hospital in North Carolina. At first it operated out of two rented rooms in a house of East Seventh Street, later moving to a new building at the intersection of Sixth and Poplar. Wilkes also helped found the Good Samaritan Hospital in 1882 in a four room house. It moved to a new building on West Hill St. (renamed W. Good Samaritan Way in 2022) in 1888. This was the first hospital designated for the care of African Americans in North Carolina and one of the first in the United States.

She was also involved in the founding of Charlotte’s first orphanage, the Thompson Children’s Home. At her funeral in January of 1913, so many people came to honor her memory that the interior as well as the grounds of St. Peter’s Episcopal Church were covered with people and flowers.