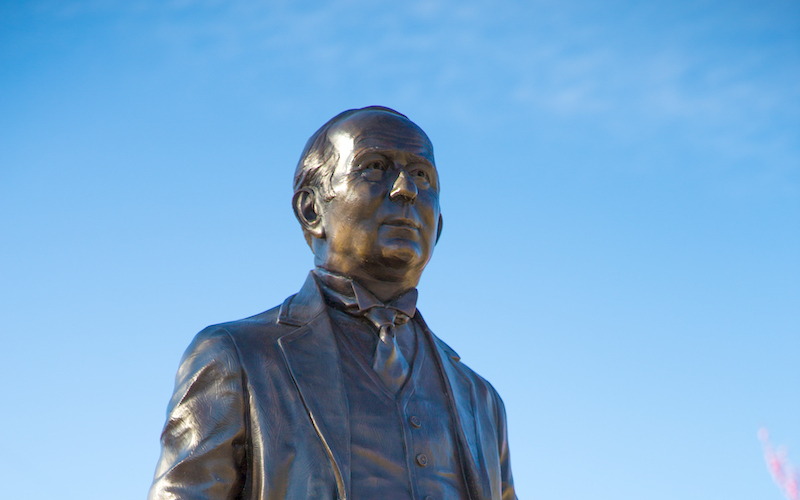 From his humble beginnings on a farm in Durham, James Buchanan “Buck” Duke became one of the 20th century’s greatest industrialists and philanthropists. He and his father, Washington, and his brother Ben, turned W. Duke Sons & Co. into a major tobacco company by shifting from tedious hand-rolled cigarettes to mechanized mass production.

By 1904, through mergers of the world’s five largest cigarette producers, the Dukes’ American Tobacco Company ranked among the largest corporations in the world.

During the great industrial age, Buck Duke also invested in banking, textiles and railways, and his Piedmont and Northern line, known as the great electric system of the South, helped the textile industry boom. He named his private train car The Doris, after his daughter.

Buck Duke understood that to develop manufacturing in the South, the region would require significant infrastructure, including the new technology of hydroelectric power.

His vision for “electrifying” the Carolinas led him to begin acquiring land and water rights along the Catawba River in the early 1900s. Partnering with Dr. Gill Wylie and William States Lee Sr., he founded the Charlotte-based Southern Power Company, which became the utility giant Duke Energy, one of the largest energy companies in the United States. Duke’s engineers dammed rivers to create Lake Wylie, Lake Norman and more.

Buck Duke’s philanthropy also reflected his ability to build on a grand scale. In 1924, working from his home in Charlotte – the site of today’s Duke Mansion in Myers Park – he established The Duke Endowment, one of the largest private foundations in the United States. When Mr. Duke’s attorney announced the trust to newspaper reporters, one observer wrote that “a hushed silence fell upon the crowd as the magnitude of the gifts began to dawn upon them.”

Ten months after signing his Indenture of Trust, James B. Duke died from a blood illness. After his funeral in Durham on Oct. 13, 1925, newspapers across the country eulogized one of the last “log-cabin successes of American life.”