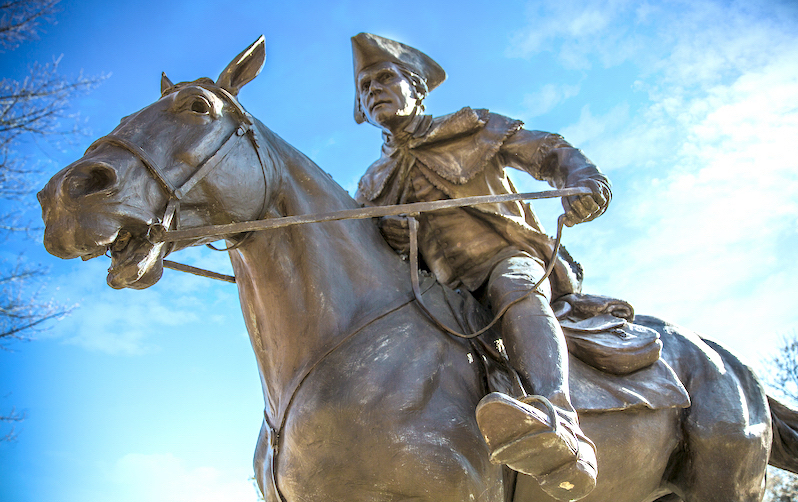 On May 19, 1775 a rider raced into Charlottetowne with news of the massacre of colonists by the British at the Battles of Concord and Lexington. Angered at this news and already burdened by the oppressive, unjust laws of King George III, a band of local patriots met throughout the night and into May 20th to draft the Mecklenburg Declaration of Independence. On May 31, they met again to draft a set of Resolves that outlined how they would self-govern. These treasonous documents declared that the actions of the Crown were intolerable and that Charlottetowne and Mecklenburg County were no longer under British rule.

According to local legend, Captain James Jack, a young tavern owner, volunteered to take these powerful documents on the arduous journey to the Continental Congress. Knowing full well that if caught he would be immediately hung, he risked his livelihood, property, family and very life to transport these important documents. Slipping past British regulars and spying Tories, Jack arrived in Philadelphia, demanding Mecklenburg County’s declaration of freedom be read into record. Just as Paul Revere’s famous ride alerted patriots to the British landing in Boston, James Jack’s ride helped kindle the embers of revolution in the Continental Congress.

Jack stated that he served “in the Revolutionary War from the commencement to the close.” A captain in the Mecklenburg militia, he is said to have been so popular that his company urged him not to accept promotions. When Lord Cornwallis occupied Charlotte in September 1780, British troops dragged Jack’s ailing father from his bed and he died not long afterwards; the home was burned to the ground. After the War, Jack moved to Georgia with his family, whom he supported by the sweat of his brow. He spent the prime of his life and his little all in the glorious struggle for independence, and enjoyed it with a heart warmed with gratitude to the God of battles.

Captain Jack has become a legendary figure in the annals of Charlotte-Mecklenburg history. He is a significant symbol of a community that has risked everything for the rights and protections that we take for granted today.