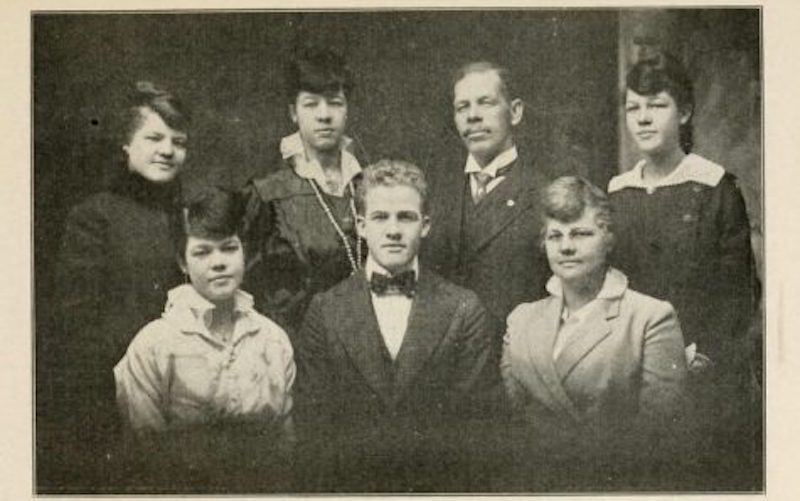 George Davis was born in Wilmington, NC in 1863.  He attended Wilmington’s Gregory Institute and then taught school in Laurinburg, S. C. from the age of 15.  He arrived at Biddle Institute in the late 1870s, graduating with an A. B. in 1883, at the age of 20.  He then proceeded to Howard University in Washington D. C. to study medicine.

The faculty at Biddle pressed him to come back and become a professor and in 1885, at the age of 23, he did so and became the first black professor at Biddle, a decision that would affect many lives in Charlotte, in North Carolina and in the nation.  Five years later he received his PhD and in 1905 he was appointed Dean of the Faculty or Academic Dean, a post he would occupy as long as he worked at Biddle.  Biddle Institute, today named Johnson C. Smith University, was one of the first five black colleges founded in the south at the end of the civil war and today, prospers as one of the leading historical black colleges in the United States.

In 1891 George Davis married Marie Gaston.  Together they had seven children.  In 1908, with her children mostly grown, Marie went to work for the Charlotte School System as a teacher in the Negro schools.  In 1913 she became the principal of Charlotte’s Fairview Colored School, remaining in that position for 32 years until her death in 1945. Fairview Colored School was the first brick Negro school in Charlotte and “the pride of the community.”  In 1953 the Marie G. Davis School in Charlotte was named in her honor.

Each summer for over 20 years the Davises taught a summer school at Biddle to provide continuing education to Negro teachers in the local school systems.  Over the years this greatly raised the quality of Negro education in Charlotte and the surrounding area.

In 1920-21 Dr. Davis retired from Biddle Institute at the age of 57 to join the North Carolina Department of Public Instruction with responsibility for the Rosenwald School construction program.  Julius Rosenwald was President of Sears, Roebuck and Company.  He was convinced by Booker T. Washington that he could do good by offering matching grants to rural communities in the south to build school buildings.  The structure of this funding was influenced by his friend Andrew Carnegie.  Dr. Davis was extremely successful in speaking to black citizens throughout North Carolina and persuading them to contribute matching funds to build Rosenwald Schools.

In his first year in office he traveled 15,000 miles, mostly on dirt roads. By 1932, George Davis had been responsible for raising $666,736 from black communities around the state for Rosenwald schools. At that time, there were 787 schools, 18 homes and 8 shops partially built by the fund in the state, which had the capacity for 2,538 teachers and 114,210 pupils, and were constructed for a total cost of $5,167,042. Eventually all but seven of the North Carolina’s 100 counties boasted at least one Rosenwald facility.   In Mecklenburg County, there were twenty-six Rosenwald schools.  Marie accompanied her husband on many of these trips, speaking to the crowds and meeting with community leaders.

The philanthropist Julius Rosenwald died in 1932 and although the Foundation continued in existence, the school building program was terminated.  When his work developing Rosenwald Schools ended he retired from the N. C. Department of Education at age 73 and commenced a new career as the executive director of the North Carolina Teachers Association.  He directed that organization for the next twelve years until his wife of fifty-three years died unexpectedly of a fall in 1945.  Dr. George Edward Davis moved to the home of his daughter in Greensboro and died there in 1959 at the age of 96.  He is buried in Charlotte in Pine Wood cemetery next to his beloved wife Marie.