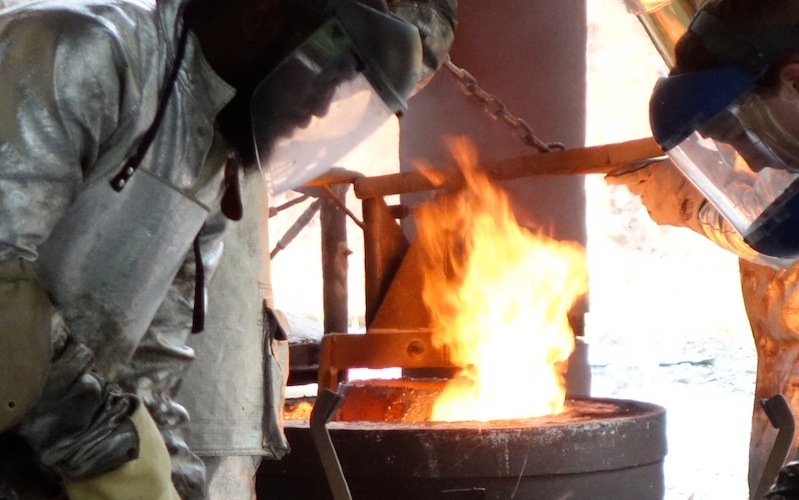 Jane DeDecker has been sculpting the human figure for more than 35 years. She seeks to capture moments that reveal truths about the human condition, that, when stripped down to their essence, are understood intrinsically. As a figurative sculptor, she communicates emotional experience through lyrical compositions that move the viewer. DeDecker was born in Marengo, Iowa in 1961. She grew up with nine sisters and brothers on a family farm, and her art work reflects a connection to nature, both the environment and human nature. Click here for image gallery.

Antonio Tobias “Toby” Mendez is a Maryland based sculptor with over 25 years of experience creating significant works of art. Born in Colorado in 1963, Toby spent most of his childhood in Japan and Thailand. Toby apprenticed under the Academy Award winning makeup sculptor John Chambers and then entered the Art Institute of Chicago receiving his BFA. While at the Art Institute, Toby learned the processes of bronze casting practiced by sculptors and fine art foundries for centuries. Toby’s untiring work as a sculptor for over 25 years, allows for the unique sensibility and insight in his work.

Wendy M. Ross has more than 30 years experience working with municipal, state, and federal agencies as well as individual clients to create both private and publicly commissioned works of art. Ross’ sculpture ranges from small-scale to monumental and is designed for placement in both indoor and outdoor settings. She works in a variety of materials, including steel, aluminum, bronze, and ceramic tile. Ross Sculpture Studio utilizes innovative, state of the art LED lighting applications and is committed to LEED and sustainable approaches. Click here for image gallery.

A man whose resume reads: former Air Force Test Pilot, America’s First African-American Astronaut Candidate, IBM Computer Systems Engineer, Aviation Consultant, Restaurateur, Real Estate Developer and Construction Entrepreneur can best be described as a true renaissance man. Ed Dwight has succeeded in all these varied careers. However, for the last 40 years, Ed has focused his direction on the Fine Arts — Gallery Paintings & Sculptures, Large-scale Memorials and Public Art projects. Since his art career began in 1978, after attaining his MFA in Sculpture from the University of Denver, Dwight has become one of the most prolific and insightful sculptors in America. Click here for image gallery.

American artist Chas Fagan grew up in Belgium and in rural Pennsylvania, gathering inspiration from the rich landscape and history of his surroundings. Chas’ ability to combine his artistic gifts with his knowledge of history has led to several high-profile commissions. Among his favorites are his statue of President Reagan in the Rotunda of the U.S. Capitol, a “young Neil Armstrong” statue for Purdue University, his sculpture of Rosa Parks in the Narthex of Washington National Cathedral, and a monumental-scale bronze sculpture in Dallas titled “Freedom’s Charge”, featuring two Revolutionary War figures and a billowing battalion flag from Bunker Hill. He was also fortunate to be asked to paint the official White House portrait of First Lady Barbara Bush, and the official portrait of Mother Teresa for her canonization at St. Peter’s in Rome.

J Brett Grill is a sculptor of figurative bronzes, monuments, and portraits. Brett earned a Bachelor’s
degree in sculpture from the University of Michigan in 2001 and an MFA in painting at the New York Academy of Art in 2003, both with honors. Brett worked as an Associate Professor of Art and Director of Graduate Studies at the University of Missouri for 10 years and now maintains a studio in Grand Rapids, MI. He has lectured on his own work and historical artistic techniques throughout the Midwest. He has exhibited at various galleries and museums across the nation including Chicago and New York. His commissioned sculptures can be found in public and private collections across the nation including the Univeristy of Kentucky, the University of Michigan, Grand Valley State Univeristy, Albion College, the New Hampshire State Library, the USS Gerald R. Ford, the City of Grand Rapids, the City of Charlotte, and the National Statuary Hall Collection. Click here for image gallery.

Ed Hamilton was born in 1947 in Cincinnati, Ohio and is a resident of Louisville, Kentucky. Ed is a graduate of the Shawnee High School class of 1965 and a graduate of the Louisville School of Art class of 1969. While attending the University of Louisville and Spalding College in the early seventies, an opportunity came along that changed his life forever. While working on his certification to teach in the public school system, Ed met the late Sculptor, Barney Bright who he worked for as an apprentice and built a lasting friendship with while he continued his quest of having his own sculpting studio.  Hamilton’s many works include the “Spirit of Freedom,” a National Memorial in the District of Columbia, Abraham Lincoln at The Abraham Lincoln Memorial at Waterfront Plaza in Louisville Kentucky, and “The Unfinished March – Martin Luther King” in New Port News, Virginia